The city of Heidelberg wins the “Start-up BW Local” competition organized by the Baden-Württemberg Ministry of Economic Affairs, Employment and Housing and is once again awarded the title of “Startup-friendly municipality”.

“Founding is always a big step and the Corona Pandemic does not make it any easier for young entrepreneurs,” says Heidelberg’s Oberbürgermeister Prof. Dr. Eckart Würzner. “We are therefore even more delighted that Heidelberg has once again been awarded this year’s prize as a startup-friendly community in Baden-Württemberg.”

The award is the result of the successful cooperation between the Department of Cultural and Creative Industries of the City of Heidelberg, the Office for Economic Development and Science of the City of Heidelberg, Heidelberg Startup Partners e.V. and the Rhine-Neckar Chamber of Commerce and Industry. Katharina Pelka from the Cultural and Creative Industries Heidelberg as well as Raoul Haschke and Thomas Prexl from Heidelberg Startup Partners e.V. presented their contribution to the “Digitalization of startup support during the corona crisis”. Heidelberg’s startup supporters reacted to the new circumstances early on at the start of the pandemic and created all the organizational and technical prerequisites to provide the best possible support for startups during the corona crisis. Many measures have had a very positive effect and lessons learned are being used to optimize and expand the services offered. For example, the digitalization of the services simplified inclusion and international collaboration with partners.

The presentation of the Heidelberg team convinced the jury of entrepreneurs with entrepreneurial experience as well as experts in the pitch on October 14 and 15 in Stuttgart and received the award “Gründungsfreundliche Kommune – Ausgezeichneter Ort 2020/2021”. A total of 26 municipalities in Baden-Württemberg can now hold this title.

Dr. Nicole Hoffmeister-Kraut congratulated the winners: “We need communities that actively support those wanting to set up a business and that play an active role in regional startup ecosystems. The winning municipalities offer services that the founders really need. Congratulations to all award-winning participants. Their commitment is important to make Baden-Württemberg one of the most dynamic regions in Europe for startups”.

The state competition “Start-up BW Local” aims to support the entrepreneurial dynamics in Baden-Württemberg. In addition, the visibility of the measures and the commitment of the representatives of the actors at the municipal level is increased. The competition format “Start-up BW Local” was awarded as national winner of the European Enterprise Promotion Award (EEPA) and was nominated by an international jury for the European final (shortlisted). It is thus already considered an international “best practice”. 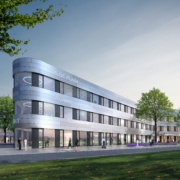 Exactly one year ago, on October 23rd, 2019, the Business Development Center (BDC) in Heidelberg was officially opened as the sixth site of the Heidelberg Technology Park. It now offers space not only for several startups from the IT, AI, biotechnology, electronics, food and media sectors, but also for Co-workers. It has also proven its worth as a venue for top-level international events.

The aim of the BDC Heidelberg, which covers an area of around 7,000 square meters, is to provide space for researchers, founders and established companies – space with campus flair, short distances and a great deal of flexibility. From offices, workplaces and laboratories with the S2 security standard to shared kitchens, a cafeteria and a conference center, everything the tenants need to develop new solutions from good ideas and experiences.

“We are delighted that with the BDC we have a location that not only attracts young companies from a wide range of industries, but also provides a platform for promoting future-oriented topics such as virtual reality or artificial intelligence,” says Thomas Prexl, Head of Innovation and Co-Creation at the Heidelberg Technology Park and Head of Heidelberg Startup Partners GmbH.

The BDC has also proven its suitability as an event venue several times over the past year. For Shift Medical 2020, an event that brought together players from the IT and medical sectors from September 24-26, the center served as a “control center”. Shift Medical is Europe’s first major online congress for virtual reality and augmented reality in healthcare. Due to Corona, the Shift Medical organization team used an extraordinary format for the online congress, which was developed by Burnthebunny GmbH, Evermynd UG and Dr. Lars Riedemann on the technical basis of the TriCAT Spaces platform: Like in a computer game, the approximately 325 participants of the event could move freely as avatars through a virtual congress center.

The Shift Medical team controlled the virtual congress from their technical center at the BDC. “There were thousands of unforeseeable technical challenges, which we were all able to master thanks to excellent cooperation and short decision-making paths between moderators, speakers, our design team and specially assembled tech teams,” summarizes Dr. med. Lars Riedemann, initiator and scientific director of Shift Medical. “We are very satisfied and participants described the congress as unique, visionary and successful.”

A further event took place on October 1st at the BDC Heidelberg, as one of seven locations in Baden-Württemberg: The High Tech Summit 2020 was organized as a hybrid event by the business initiative bwcon (Baden-Württemberg connected). In numerous live streams, participants were able to watch and listen to lectures and discussions on current technology-oriented issues such as data use in the healthcare industry, digital craftsmanship and competence building in the field of AI under the slogan “Turning Data into Business”.

Home of the KI Lab Kurpfalz

As an initiative of the Heidelberg Technology Park in cooperation with bwcon, the KI Lab Kurpfalz had already been opened at the BDC Heidelberg in April. Regular events on the subject of artificial intelligence are now held there – with the aim of giving small and medium-sized enterprises (SMEs) easy access to the future technology of AI.

“At the BDC Heidelberg, plans are forged and business ideas realized,” says Prexl. “One year after its opening, we can say that our new site in Heidelberg and beyond has established itself as a workshop for the future.”

Heidelberg Technology Park’s team has put together a list of existing support programs:https://www.technologiepark-heidelberg.de/en/corona-support-for-companies/

We may request cookies to be set on your device. We use cookies to let us know when you visit our websites, how you interact with us, to enrich your user experience, and to customize your relationship with our website.

Click on the different category headings to find out more. You can also change some of your preferences. Note that blocking some types of cookies may impact your experience on our websites and the services we are able to offer.

These cookies are strictly necessary to provide you with services available through our website and to use some of its features.

Because these cookies are strictly necessary to deliver the website, refuseing them will have impact how our site functions. You always can block or delete cookies by changing your browser settings and force blocking all cookies on this website. But this will always prompt you to accept/refuse cookies when revisiting our site.

We fully respect if you want to refuse cookies but to avoid asking you again and again kindly allow us to store a cookie for that. You are free to opt out any time or opt in for other cookies to get a better experience. If you refuse cookies we will remove all set cookies in our domain.

We provide you with a list of stored cookies on your computer in our domain so you can check what we stored. Due to security reasons we are not able to show or modify cookies from other domains. You can check these in your browser security settings.

We also use different external services like Google Webfonts, Google Maps, and external Video providers. Since these providers may collect personal data like your IP address we allow you to block them here. Please be aware that this might heavily reduce the functionality and appearance of our site. Changes will take effect once you reload the page.